Remembering the fallen heroes of Biafria I am in mourning mood. I am remembering the fallen heroes. Today 30th May, the flag in our hearts is being lowered. The only sin committed by the entire south eastern and south -south killed in the North is to be Nigerian. 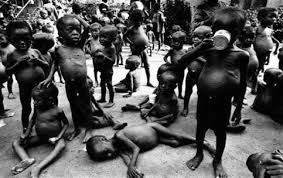 48 years ago (1966) 50, 000 Igbos and other Easterners were murdered within 3 weeks in  Northern-Nigeria with the supreme support of the then Federal Government chaired by them. It lasted for months. During the gruesome dastardly pogrom, the then Governor of Eastern Nigeria, Chukwuemeka Odumegwu Ojukwu sought for diplomatic ways to end the carnage. He sought for help from the international community, and the African Union. Eventually a reconciliatory meeting was held in Aburi Ghana (the famous Aburi-Accord) by the then president of Ghana.

Agreements were reached to resolve the crisis for each region in Nigeria to control its police and its God given natural resources, aptly a confederation. When they came back from Ghana, the then Northern Nigeria chaired military government reneged the agreement with the advice of the British government that if he agree with such, that the Northern-Nigeria will lose its hold of subjugation of the Eastern-Nigeria which is blessed with everything you can think of on earth, (crude oil, coal, arable land, industrious and ingenious people). In 1967 when the brutality, the killings and the first pogrom in the world continued, Ojukwu by the advice of the council of elders from the Eastern-Nigeria declared the Republic of Biafra to protect his people from the dastardly wanton killings by the people they share same passport with. After few months of the young but promising Republic of Biafra, the Nigeria government declared war on Igbo people and the entire Eastern Nigeria. Between 1967-1970 more than 3.5 million Biafrans were already murdered by the then USSR, Britain, Egypt, Arab Nations, Nigeria and US by proxy). The Easterners were at that time the most educated race in Africa with their abundant natural and human resources they were in the fore front of becoming the first developed African nation. The various countries that participated in the genocide had different reasons. For example, for Egypt and Arab nations it was a religious war to conquer and subjugate the Easterners into the Islamic Northern Nigeria rule. For Britain, USSR and US by proxy, it was an economic war to keep the control of our God given resources in hand of the less educated, and  North who they can remote to milk our resources. Emeka Ojukwu was the son of the first African billionaire and an Oxford educated young man. He definitely knew much as they do. When they saw that no military power can crush the IGBOS, , they employed hunger as the weapon of war. 3.5 million BIAFRANS died in starvation. It was a war of survival. Ojukwu couldn’t see his people continue to die; he left the young Republic with instruction to his second in command Philip Effiong to end the carnage. After the bitter 3 years the Nigeria government confiscated every asset Ndi-Igbo had. Even if you have billions in your account, you will be given only a meagre 20 pounds. They turned our brothers against us. Termed our sweats abandoned properties and shared it.

The French, Portugal, Denmark and other European governments made efforts to stop the aggression but the British and the powerful USSR blocked every effort to free the people. A French diplomat once said, “Before I visited Biafra they said Biafrans fight like heroes, when I came I saw that heroes fight like Biafrans”… It was a reflex action, a war of survival.

They tried to subjugate us by bombing our hospitals, churches, schools, recreational centres. After the bitter 3 years. We picked our pieces and moved on with 20 pounds. Today the Igbo have the highest HDI in the contraption called Nigeria. The HDI of Ndi-Igbo is comparable to any 2nd world country. Greater than the HDI of any race in Africa. The Jihadists and economic warriors bombed Asaba, Enugu, Aba, Onitsha, Owerri, and so many of our cities but today, are they better of? The cities they bombed to nearly extinction are today better than most  cities and 80% of the choice properties in Lagos and Abuja are own by igbos.TODAY IGBO INVESTORS AND BUSINESS ARE THE ENIGMA OF ALL BLACK AFRICAN
BIGGEST CITIES  .Their land is presently being ravaged by their own sons, the Jihadists (Boko Haram), and no apology please!!! Some of them were rejoicing when Boko Haram were targeting Ndi-Igbo and churches in Northern Nigeria, today the table has turned. Their cities have turned to ghost towns.

On May 30, 1969 “In New York , an American boy, David Mayrock burned himself to death because of the carnage going on in Biafra and also to compel the US government to cease their support in the genocide.