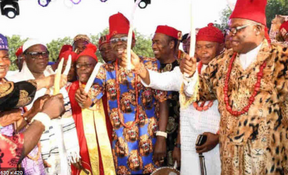 Ndigbo Lagos associates itself with the demands of the #ENDSARS protests across the nation of Nigeria. It is regrettable that miscreants hijacked the genuine protests resulting in destruction of lives and properties and looting of shops in several cities in Nigeria, especially in Lagos. It is equally regrettable and condemnable that inappropriate use of force was applied against the genuine protesting youths on October 20th, 2020 at Lekki Toll Gate Lagos with the unfortunate results of fatalities and gunshot injuries. May the souls of the departed rest in perfect peace. We equally condemn the attacks of hoodlums on the Palace of Oba of Lagos, taking away his staff of office and leaving behind them flames of fire on the Palace. This amounts to mindless desecration of the exalted throne of the Oba and the traditions of the land.

Further to the above developments, Ndigbo Lagos notes with displeasure, a malicious, spurious and mischievous publication by AOKOYA gaining traction in the social media, insinuating that some Igbos may have been responsible for the unfortunate collateral damage in Lagos by hoodlums under the guise of #ENDSARS Protests. They alleged that the destruction was a fallout of envy and desire of enemies of Yorubas to destroy the industrial and other advantages Yoruba land has over them.

Ndigbo Lagos makes haste to state that the above perception is founded on falsehood and grossly misleading. While not joining issues with AOKOYA, Ndigbo Lagos cautions that such misinformation can drive a wedge between the Igbos and Yorubas, notwithstanding the historic mutual relationship between the two ethnic nationalities, especially those living in Lagos. AOKOYA appeared to be insensitive to the dangers of insecurity such unthoughtful publications could trigger off.

Ndigbo Lagos is not unmindful of the fact that #ENDSARS Protests with their demands for good governance, justice, fairness and restructuring of Nigeria to a true federal nation is being resisted by the beneficiaries of the convoluted Nigeria as presently configured. The common adversaries of change will fight back by employing all sorts of divide and rule tactics to break the ranks of all nationalities pushing for change in Nigeria. Yorubas, Igbos and several other nationalities that are pushing for true federalism should not allow divide and rule among themselves through fanning of ethnic sentiments. A house divided against itself cannot stand.

Ndigbo Lagos draws the attention of AOKOYA to the fact that only a foolish man who lives in glass house throws stones. How could Igbos who have much stake in the peace and security of Lagos on account of their investments and long-standing relations risk participating in destruction of properties in Lagos? This is both unthinkable and unintelligible.

Ndigbo Lagos assumes that the publication of AOKOYA may have been in response to the recent voice message of Mazi Nnamdi Kanu on the unfortunate destructions by hoodlums in the ENDSARS Protests in Lagos. We also listened to the unfortunate voice message, which was provocative, and reminiscence of terrorism and we distance ourselves from the unwarranted vituperations in the voice message. Ndigbo Lagos recognizes Mazi Nnamdi Kanu as our son, but he did not and does not speak for Igbos on any issue. Nnamdi Kanu’s mispeak should therefore not be visited on Igbos as much as Yoruba nationality should not be held accountable for the rantings of their sons who sometimes fly off the handle.

Ndigbo Lagos commiserates comforts the Governor of Lagos State over all the losses and urges him to continue to stay focused in his efforts to provide dividends of democracy and especially security to all under his jurisdiction in this trying times. We urge all Igbos in Lagos not to be involved in any form of illegalities, but to mind their businesses and immediately report any suspected criminal plans to security agencies and to Ndigbo Lagos through its phone numbers. Long live Nigeria. Long live Lagos State.

#End Sars: RECALL OF ALL SOUTH EAST MEMBERS OF HOUSE OF REPRESENTATIVES AND SENATE.